Still Not Living in a Computer Simulation

A couple of commentators on a previous post pointed me to an Arc Digital article by Thomas Metcalf which contends that the Simulation Argument (SA) ought to be taken more seriously. (Metcalf’s article wasn’t written in response to mine, although it appeared a week or so afterward: post hoc sed non propter hoc.)

I don’t think there’s anything in the article that poses any problems for the arguments I gave in my post. Rather than respond to every point, I’ll just quote a few sections and make some comments. 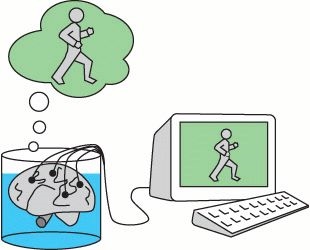 Metcalf observes that the SA has two key premises:

The Empirical Premise: Most of the “people” who think they’re real, flesh-and-blood humans are actually conscious computer programs.

The Indifference Premise: If most people are simulated, then you are probably simulated.

The idea behind the Indifference Premise is simple: If most people have some feature, then absent other evidence, you should guess that you probably have that feature.

Metcalf later considers “some better objections” to the SA, the first of which is this:

1. “Is it even possible for a computer program to be conscious?”

This objection may go too far. Compare: “Imagine a single atom of carbon, hydrogen, oxygen, or nitrogen. Surely that tiny object is unconscious. Now how could a big pile of such unconscious things be conscious?” Of course, another name for a certain pile of carbon, hydrogen, oxygen, and nitrogen is “a human brain.” Yet we probably agree that many human brains are conscious.

The fact that philosophers disagree over whether a computer program (or a computer running a program) can be conscious shouldn’t move us one way or the other. The question is, which side has the better arguments?

Metcalf’s brief defense of the ‘yes’ side is question begging. I don’t agree that “many human brains are conscious,” precisely because I don’t think that any physical object is conscious. I think the human mind is conscious (or perhaps better: the human person has a conscious mind) and the mind is not the same thing as the brain. That’s why I’m a dualist about the mind-body issue. Any dualist is simply going to deny that “many human brains are conscious.” Metcalf doesn’t give us any non-question-begging reason to think that a computer can be conscious. (There are some serious arguments for physicalism about the mind; I commented on a common one here.)

This objection depends on the assumption that more-complex hypotheses are less likely to be true. That’s debatable. I’ve criticized a version of it.

I haven’t read Metcalf’s paper, but based on the abstract it looks like the “common principle of parsimony” he criticizes in that paper is not the principle of parsimony at work in the objection here. The principle he criticizes has to do with ‘ontologies’, i.e., theories about what types of entities there are. But the simulation hypothesis isn’t that kind of theory. It’s a theory about (1) what kind of beings we are, (2) what is causing our conscious experiences, and (3) whether our experiences are veridical. And clearly there’s a simpler theory that can equally well explain the data in question: the theory that we are not living in a computer simulation and the world we experience just is the real world.

3. “It doesn’t feel as if we’re in a simulation. The world around me seems real.”

Yes; it’s just very implausible that we are living in a simulation right now. The people around us seem conscious and human. Most of us have the strong intuition that we live in the real world, maybe an intuition even stronger than the intuition that the Empirical Premise or that the Indifference Premise is true.

This objection depends on trusting such intuitions. Many experts are skeptical. Still, a case can be made that denying the reliability of intuitions is a big mistake. It might leave us in a position of global skepticism: the position that we aren’t justified in believing anything. If so, then we’d also have to be skeptical of the beliefs that led us to take the Simulation Argument seriously in the first place.

Exactly right. In fact, that’s quite close to my argument in the original post that “the simulation hypothesis has a deeply self-defeating character to it.”

Finally, on the implications of the simulation hypothesis for how we should live our lives:

In turn, you should want to be an entertaining, likable, and morally good person. Of course, whether you think we’re in a simulation or not, that’s good advice.

Well, at least we can agree on that!

3 Responses to Still Not Living in a Computer Simulation