For this week only, you can save 50% on more than fifty video teaching series and study guides from Ligonier Ministries, including Exploring Islam by yours truly, The New Testament Canon by my colleague Dr. Michael Kruger, and Contentment by Melissa Kruger.

Ligonier’s video teaching series are excellent resources, especially for adult/teen Sunday school classes and small group studies, and the accompanying materials are very professionally produced. This is a fantastic offer, so don’t miss out!

Comments Off on 50% Off Ligonier Video Teaching Series 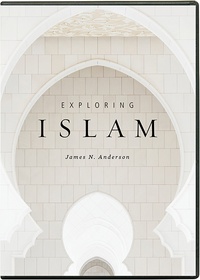 Last year Ligonier Ministries invited me to work with them to produce a new teaching series on Islam. The final product, Exploring Islam, is now available.

Here’s the description from the DVD cover:

Speaking the Truth in Love

What do Muslims believe? With so much diversity in the Muslim world, it is common for people to hold uninformed opinions about Islam. In Exploring Islam, Dr. James Anderson prepares Christians to better witness to their Muslim neighbors with gentleness and respect, as he surveys the central tenets, history, and practices of the Islamic religion. This is a series to stir confidence in the gospel and equip you to speak the truth in love to the Muslims in your community.

The first in the series (“Why Study Islam?”) can be viewed for free on the product page.

Apparently the DVDs include Spanish dubbing and closed captioning.

The series should be useful for adult Sunday schools, small groups, campus ministries, church youth groups, and high-school classes. I’m convinced it’s more important than ever before that Christians understand the challenge of Islam and are equipped to engage with Muslims in a well-informed, gospel-centered way. I hope this series will be a helpful resource to that end.

On a personal note, it was a real pleasure to work with Ligonier on this series and to spend time with their team. Their hospitality and professionalism is second to none.

No God but One: Allah or Jesus?

My review of Nabeel Qureshi’s book No God but One: Allah or Jesus? appeared in the September 2017 issue Reformed Faith & Practice. The review was written some time before Nabeel’s death, and, by unfortunate coincidence, it was published online on the day of his funeral. For that reason, I didn’t draw attention to it at the time. Still, I think it makes some important observations about current trends in evangelical apologetics, so I’m now highlighting the review here.

Comments Off on No God but One: Allah or Jesus?

On Contradicting the Bible

The Same God? A Plea for Precision

So the basic problem is this: the question “Do Christians and Muslims worship the same God?” is ambiguous as it stands, and thus susceptible to different answers depending on exactly how one interprets the question. In reality, when people raise the question they often end up conflating a host of related but distinct questions, such as the following:

END_OF_DOCUMENT_TOKEN_TO_BE_REPLACED

Recently I watched the two-part discussion between Dr. James White, President of Alpha & Omega Ministries, and Imam Muhammad Musri, President of the Islamic Society of Central Florida, which took place on March 21, 2015, at Reformed Theological Seminary in Orlando.

If you’re looking for a good introduction to the defining issues between Christianity and Islam, and the arguments offered on either side, I highly recommend you take the time to watch the two videos below. Trust me: it will be 3½ hours very well spent. (Especially if you watch them while using an elliptical, as I did.)

END_OF_DOCUMENT_TOKEN_TO_BE_REPLACED

Where Are the Muslim Doctors and Nurses?

Posted on 24 June 2014 | Comments Off on Where Are the Muslim Doctors and Nurses?

For a couple of years now, I’ve taught a course entitled Christian Encounter with Islam. One of the major themes of the course, as you might expect, is the contrast between the Christian worldview and its distinctive view of God, and the Islamic worldview and its distinctive view of God. In light of that contrast I was particularly struck by the following section (pp. 220-22) from the recently published book Dispatches From the Front, a missions travelogue by Tim Keesee. (Pay close attention to the third paragraph.) END_OF_DOCUMENT_TOKEN_TO_BE_REPLACED

Comments Off on Where Are the Muslim Doctors and Nurses?

One Good Burn Deserves Another

Needless to say, the Koran-burning stunt (apparently now abandoned, thankfully) was a phenomenally stupid idea. But does anybody know the Arabic for “double standards”?