Why Is There Evil In The World (And So Much Of It)?

I’m delighted to report that the third volume in the Christian Focus series, The Big Ten: Critical Questions Answered, is now available: Why Is There Evil In The World (And So Much Of It)? by series co-editor Greg Welty. 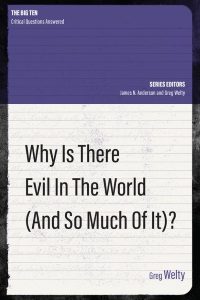 Having been closely involved in the editing process, I’m thrilled to see this book finally in print. The title reflects what may be the most common reason people give for rejecting the Christian faith and doubting the existence of God. It is indeed a critical question that demands an answer.

But isn’t it one Christians have been answering for centuries? Yes, of course. There are many fine works already available on this issue, both ancient and modern, and Welty acknowledges his debt to them. But I think this book fills a particular niche at this time. So many contemporary books on the problem of evil fall down in one or more of the following areas:

Why Is There Evil In The World? avoids all these pitfalls. Moreover, Greg is ideally qualified to have written this book. He wasn’t raised in a Christian home, so he knows what it’s like to be a skeptical unbeliever. He earned a bachelor’s degree in philosophy from the University of California, an MDiv degree from Westminster Seminary California, and MPhil and DPhil degrees in philosophical theology from the University of Oxford, and he has taught seminary courses in Christian apologetics and philosophy of religion for 15 years. He also serves as one of the pastors at Grace Baptist Church in Wake Forest, so he doesn’t live up in the ivory tower!

Here’s the table of contents for the book, which should give you a good idea of how Welty tackles the issue:

The book has received endorsements from John Frame, Paul Helm, Scott Oliphint, David Robertson, and Mike Kruger, among others. So you don’t have to take it from me — it comes highly recommended! I really hope it will become the go-to book for ‘ordinary’ folk, both believers and skeptics, who are looking for a well-informed and well-argued response to this age-old question.

Comments Off on Why Is There Evil In The World (And So Much Of It)?

Why Should I Believe Christianity?

Good question! I offer my answer, over eight chapters and a couple of hundred pages, in the second volume of the recently launched Christian Focus series, The Big Ten: Critical Questions Answered. The new book — ingeniously titled Why Should I Believe Christianity? — is basically an introductory exposition and defense of the biblical Christian worldview, but with some distinctive features (on which, see below). In this post, I’ll summarize the content of the book for anyone who might be interested to read it or give it to a non-Christian friend. 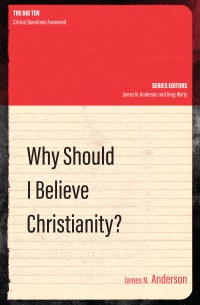 Chapter 1 (“Why Believe?”) considers the general question, Why should I believe anything at all? Simply put: we should believe something if it’s true, and we generally determine whether something is true by way of reasons (which can take different forms). We should aim to have beliefs that are objectively true, rather than beliefs that are (say) comfortable, desirable, or fashionable. The chapter also briefly addresses the epistemological cul-de-sacs of relativism and skepticism.

Chapter 2 (“The Big Picture”) seeks to explain why Christianity should be evaluated as an entire worldview: as a comprehensive, integrated, self-contained, self-defining perspective on everything that exists and matters to us. I explain what a worldview is, why worldviews matter, why only one worldview can be true, and how we can apply four ‘tests’ for evaluating worldviews in order to identify that one true worldview.

Chapter 3 (“Christianity as a Worldview”) sets out a summary of the Christian worldview along familiar lines: God, creation, mankind, fall, revelation, salvation, and consummation (“the final chapter”). One of my aims here is to explain the biblical worldview in ‘ordinary’ language (as far as that’s possible!) and in a way that communicates the internal coherence of that worldview.

Chapter 4 (“God is There”) makes a case for the central tenet of the Christian worldview — the existence of the personal creator God of the Bible — based on six features of our everyday lives that we all take for granted: existence, values, morality, reason, mind, and science. I also suggest that while God’s existence can be demonstrated through reasoned arguments, such arguments aren’t necessary in order to know that God exists, because his existence is plainly evident from his creation (Romans 1:19-20).

Chapter 5 (“God is Not Silent”) contends that if a personal creator God exists then he would speak to us, and that God has in fact spoken to us through the prophetic scriptures of the Old and New Testaments. (You’ll have to get the book to find out how I make that argument!) Along the way I explain why, when it comes to divinely inspired scriptures, we should favor the Christian view over the alternative views of Judaism and Islam. I close out the chapter with an appeal to the ‘expert’ testimony of Jesus.

Chapter 6 (“God With Us”) focuses on the true identity of Jesus. Here I make a fairly traditional case for the deity of Christ, appealing primarily to his own testimony and that of his disciples, but also drawing on other confirming evidences. One feature of the argument is that it connects the incarnation with the other tenets of a Christian worldview, highlighting again its inner coherence. The chapter finishes by addressing a common objection, namely, that a divine incarnation is logically impossible and therefore can be dismissed regardless of the supposed evidence.

Chapter 7 (“Defying Death”) explains why Christians believe in the resurrection of Christ and how that essential article of the Christian faith fits into the broader biblical worldview. After dealing with some common objections to miracles, I argue that it’s reasonable to believe in the resurrection and unreasonable to accept any of the various naturalistic alternatives.

Chapter 8 (“What Now?”) ties together the various threads of argument in the preceding chapters and leaves the unbeliever with a challenge: If not Christianity, then what? There must be some worldview that corresponds to reality and makes sense of our experiences of the world. If it isn’t the Christian worldview, which worldview is it? There’s certainly a fence between Christianity and its competitors, but it isn’t one you can sit on.

END_OF_DOCUMENT_TOKEN_TO_BE_REPLACED

I’m delighted to announce the launch of a new apologetics series from Christian Focus Publications entitled The Big Ten: Critical Questions Answered. The goal of the series is to offer credible answers to some of the most pressing questions asked by skeptics and other non-Christians in the Western world. As the series title indicates, there are ten books planned in total, each addressing a different question. The series is being co-edited by yours truly and Greg Welty, associate professor of philosophy at Southeastern Baptist Theological Seminary. (On a personal note, it’s a privilege to work on this project with Dr. Welty, who is not only an outstanding Christian scholar but also a dear friend.)

The books are pitched at educated, thoughtful laypersons, providing answers to the title questions that are both intellectually robust and theologically orthodox, while avoiding (where possible) Christian jargon and technical philosophical discussions. Written in a conversational style, the books are addressed to unbelievers but will also prove (we hope) to be a useful and edifying resource for believers. Indeed, our desire is that Christians will read them and think, “These would be perfect to give to my non-Christian friends and colleagues who are asking those very questions.”

The first two books in the series have just been released: Does Christianity Really Work? by William Edgar, and my own contribution, Why Should I Believe Christianity? I plan to post separately about these two volumes over the next few days.

Our goal moving forward is to see two books published each year (although the usual caveats about “the best laid plans” apply here as they do anywhere else!).

Here are ten titles in the series, with the contracted authors:

Our hope and prayer is that Christ will be glorified and his kingdom extended through this series of apologetics resources.