Are We Living in a Computer Simulation?

I’ve been asked several times recently how I would respond to the claim that we are (or might well be) living inside a computer simulation. I don’t think the folk who pose the question to me are themselves worried the claim might be true; rather, they recognize it as a new kind of skeptical challenge and they’re curious to know how Christians might respond to it. Also, I suspect they’ve encountered some unbelievers who use the simulation hypothesis as a kind of nuclear option to derail serious discussions about the evidence for Christian claims. (“How do you know you haven’t been brainwashed into believing Christianity? How do you know you’re not being deceived by a malevolent demon? How do you know you’re not in a dream right now? How do you know the entire universe isn’t just an elaborate computer simulation? Huh? Huh?”)

As it happens, there are some smart people who take the simulation hypothesis seriously: Nick Bostrom, Elon Musk, Neil deGrasse Tyson, and Scott Adams, among others. They don’t necessarily believe it, but they don’t think it’s implausible. So what can be said in response? Can the hypothesis be refuted?

In the first place, we need to be clear on exactly what the hypothesis is. Precisely what kind of computer simulation are we talking about here? In what sense would we be “living in” such a simulation? Let’s consider three possible scenarios. (I don’t claim these exhaust the possibilities, although I think they cover the major options.)

On this view, the universe would be a simulation in the way that the popular video game The Sims is a simulation. The difference would be only a matter of scale and complexity. This scenario is easily refuted though, because it’s trivially self-defeating. The “virtual people” in The Sims are entirely fictional. It’s not merely that they aren’t conscious beings; they aren’t beings at all. They no more exist than Sherlock Holmes and Captain America exist. The Sims is, in effect, just a highly interactive CGI movie.

On this view, we’re living in a simulation in the way that Neo was inhabiting a virtual world in the movie The Matrix. Neo himself wasn’t a simulation (at least, on the most natural interpretation of the first movie). Neo existed independently of the Matrix, but his sensory organs were being manipulated or bypassed so as to present him with experiences of an artificial world indistinguishable (at least phenomenologically) from the real one.

Note that in the movie, Neo began to receive signals from the ‘outside’ world (i.e., the real world) that the world he inhabited wasn’t what he assumed, and eventually (after taking the red pill) he had compelling evidence that he had been living in a simulated world. But we have none of that. (At least, I don’t. Do you?) 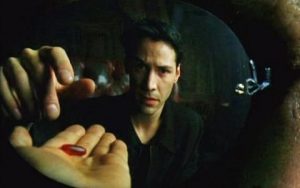 What’s more, even if we were living in a Matrix-like simulation, we would still exist independently of that simulation, and we would need some cogent explanation for (1) our independent existence, (2) our consciousness, (3) our capacity for reason and coherent experiences, and (4) the existence of the simulation (and whatever apparatus implements it). All of these ultimately presuppose the existence of God (so I’ve argued elsewhere). In other words, there are theistic arguments — especially the transcendental argument — that aren’t the least bit undermined by a Matrix-simulation hypothesis. And if God exists, that provides us with good reason to reject such a hypothesis.

Scenario 3: Brains in a Computer

This version of the hypothesis proposes not only that our experiences are the product of a simulation (as in Scenario 2) but also that we ourselves are part of the simulation apparatus. Thus (contra Scenario 1) we actually exist, but (contra Scenario 2) we don’t exist independently of the simulation. The idea here would be that there is something like a super-computer running the entire simulation, and parts of that computer (which is essentially a complex physical machine) are conscious. Indeed, those parts are not merely conscious but self-conscious. Thus, there are multiple conscious subjects that are generated by an underlying physical substrate (computer circuitry, neural network, whatever). But the experiences of these conscious subjects aren’t veridical. They don’t reflect the real world in which the super-computer exists, but instead present a simulated virtual world.

Think of it this way. Imagine that some very smart scientists invent robots so advanced that they possess consciousness (think of the Replicants from Blade Runner or the Cylons from the Battlestar Galactica reboot). The robots have real experiences and a first-person perspective. Now imagine that instead of having “sense organs” (cameras, microphones, touch sensors, etc.) that give them experiences of the real world, their “brains” (i.e., the parts of the robots that support thought and consciousness) are removed and wired up so that the robots have experiences of a purely virtual world. In other words, the world they inhabit — the world of their experience — is actually a computer simulation. Now suppose that their “brains” are all flattened out on a giant circuit board. (It doesn’t actually matter to them how the physical substrate is arranged.)

Now, finally, imagine that we are them.

Why couldn’t that be the case? Here are several reasons to disbelieve it.

First, there’s no reason to think that consciousness can arise out of purely physical structures, no matter how complex; indeed, there are very good reasons to think that it’s metaphysically impossible. Mental properties are categorically different than physical properties (e.g., minds exhibit subjectivity and intentionality, which can’t be reduced to anything like material properties). If it’s impossible in principle for a physical machine (or any kind of physical structure) to be conscious, then Scenario 3 is flat-out impossible. It can’t get off the ground. It can’t even taxi onto the runway.

Moreover, it appears that human minds can perform various non-algorithmic tasks that cannot be simulated by computers (which are algorithmic by nature). That’s another reason to think Scenario 3 couldn’t be true. The skeptic may be tempted to reply, “Our brains are just biological computers, so it must be possible for a physical apparatus to perform non-algorithmic tasks!” But that would obviously beg the question. In short, Scenario 3 depends on the highly questionable strong AI thesis.

But even if this scenario were metaphysically possible, the same kind of burden-of-proof objection would apply: What positive reasons are there to think that we are the self-conscious parts of a computer experiencing a purely virtual reality?

You guessed it: none.

In terms of appearances alone (i.e., how things appear to us) the two scenarios would be indistinguishable. But obviously the real-world scenario is far simpler than the virtual-world scenario. We have no evidence that favors the second over the first. Scenario 3 is basically a cosmic-scale conspiracy theory. That doesn’t mean it’s false, but it does mean it shoulders a heavy burden of argument.

Furthermore, as with Scenario 2, there are theistic arguments that would be cogent even if Scenario 3 were true. So we’re actually faced with the choice between (H1) there is a personal creator God and we have experiences of the real world, and (H2) there is a personal creator God, he permitted the construction of a massive computer simulation, we are part of that computer simulation, but we don’t have experiences of the real world. It’s safe to say that H1 is far more coherent and parsimonious than H2! In what possible world — indeed, in what virtual world — would it be more rational to believe H2 than H1?

One final observation to wrap things up. As far as I can tell, the only people seriously considering the simulation hypothesis are people who hold to a evolutionary naturalist worldview, according to which all intelligent life in the universe is the product of entirely natural evolutionary processes. On this view, the existence and capacities of human beings can be (and largely have been) explained in wholly scientific terms and by way of an evolutionary history. I think it would be fair to say that evolutionary naturalism functions as a tacit presupposition of the simulation hypothesis — or at least of those who invite us to entertain it.

So relax! We aren’t living in a computer simulation. You can sleep soundly in your bed tonight. (Just try not to dream of electric sheep.)

6 Responses to Are We Living in a Computer Simulation?