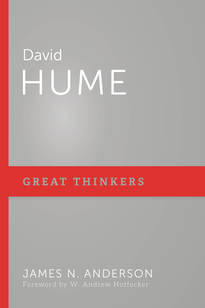 My contribution to P&R’s Great Thinkers series has now been published. You can find more details on P&R’s website, including a sample chapter.

You can also read (or listen to) an interview about the book with Fred Zaspel at Books At a Glance.

I’ll be posting some excerpts from the book on my blog later this week, but for now here’s the publisher’s blurb and the table of contents:

Through his pursuit of a naturalistic grounding for morality and his forceful critique of supernaturalism, Scottish philosopher David Hume significantly undermined confidence in orthodox Christianity.

Professor, minister, and philosopher James Anderson summarizes the major points of Hume’s thought and offers a critical assessment from a distinctively Reformed perspective. He shows that Hume’s arguments, far from refuting the Christian worldview, indirectly support that worldview by exposing the self-defeating implications of naturalism. Deepen your understanding of this immensely influential thinker, and you will be better able to engage with today’s secular challenges to faith.