Ten years ago I wrote a review of David Bentley Hart’s book Atheist Delusions for the Discerning Reader website (which now appears to be on its last legs). Since I’ve seen Hart’s book recommended by evangelical pundits several times in recent weeks, I’m going to reproduce (and thereby reboot) the review here. 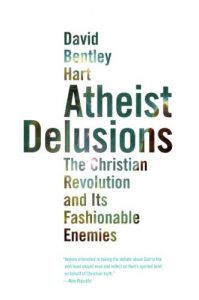 An informative, entertaining, and ultimately unsatisfying response to the historical revisionism of the New Atheists.

In generations past, atheists attacked Christianity by arguing that it simply wasn’t true. Some of their arguments against God were innovative, philosophically sophisticated, and deserved a response (which they duly received). Today’s atheists aren’t satisfied with that approach. They want to persuade us not merely that Christianity is false, but that it is wicked as well. Religion in general—and biblical religion in particular—is an overwhelming force for evil in the world, so they would have us believe. Hence the forthright title and subtitle of Christopher Hitchens’ recent polemic: God is Not Great: How Religion Poisons Everything.

This two-pronged strategy of the New Atheists calls for a two-pronged response. The first is to argue (as Keith Ward has done) that there are good reasons to believe in God—or at least to contend (as Alister McGrath has done) that Hitchens and co haven’t given any good reasons not to believe in God. The second line of response is to refute the charge that Christianity has done more harm than good, by marshaling historical evidence to the contrary. This is the approach of David Bentley Hart’s new book, Atheist Delusions: The Christian Revolution and Its Fashionable Enemies.

Hart’s thesis, in a nutshell, is that the New Atheists (among whom Hitchens seems to be the primary target) have grossly misrepresented the history of Christianity and its positive cultural impact on the world. Part 1 surveys the new “gospel of unbelief” and its apologists, before raising questions about its central tenet, namely, that the world is a better place for the rise of modernity and will become an ever better place if only the modernist creed—absolute human autonomy—is embraced with greater consistency.

Part 2 directly challenges “modernity’s rewriting of the Christian past” with a survey of the cultural battle between the fledgling Christian faith and its pagan rivals. Hart is particularly concerned here to debunk the modern myth that Christianity represented the forces of superstition, irrationalism, intolerance, and violence, whereas ancient paganism represented its polar opposite: love, peace, and a “live and let live” attitude toward minorities. The historical reality is that pagan culture was anti-intellectual, corrupt, oppressive, and bloodthirsty. Against this dark and depraved backdrop, Christianity was a welcome breath of fresh air. Optimistic, liberating, and anti-elitist, it preached the highest standards of moral integrity and generated a cultural environment in which philosophy and science would flourish for many centuries. In short, the greatest benefits of the world we inhabit today can be credited to Christianity’s account.

Unfortunately in Part 3 of the book Hart’s case begins to lose steam, and, in my judgment, to come off the rails. As best I can tell (because it isn’t altogether clear) these six chapters develop the case that our modern conception of ‘humanity’ is “the positive invention of Christianity”; and if this is so, it follows that as our culture abandons its Christianity, it will also thereby abandon its humanity. This would be a powerful conclusion, but Hart’s argument is problematic in several respects. First, it’s hard to distill from the 100 pages of discussion exactly what the argument comes to; what its premises are and how the conclusion follows from them. The burden of the final chapter of Part 3 (“Divine Humanity”) is to show that the Christian doctrine of the Incarnation elevated our conception of humanity to the level of divinity, thus infusing humanity with the highest dignity and destiny. This claim, however, turns on a very questionable interpretation of the Incarnation (one that goes well beyond the ecumenical church creeds) and demands rather more precision and argumentation than Hart supplies. Perhaps the argument is more profound and subtle than I’ve grasped; if so, its profundity and subtlety are obscured by Hart’s flowery and meandering prose.

The final two chapters of the book draw matters to a close by casting a pessimistic vision of the society that chooses to pursue Enlightenment values over Christian values and of the ethics and science that would characterize such a society.

While I agree with Hart’s overall thesis—that Western civilization owes a far greater debt to Christianity than its secularist despisers can bear to admit—I must express a number of serious reservations about the book as a whole. As I noted above, Atheist Delusions seeks to expose the crass historical revisionism of Hitchens and his comrades-in-arms. It largely succeeds in this goal. Its author, however, seems surprisingly reluctant take matters any further. Surely it’s not enough to say that Christianity has been good for the world; we also want to say that Christianity has been good for the world because it’s true. Yet one looks in vain for any clear indication that Hart believes the claims of Christianity to be factual claims. If he does, he nowhere shares the reasons for his beliefs. And in the final sentences of the book, Hart speaks of Christians in the third person—an odd grammatical choice for one who dons the mantle of a Christian apologist.

There are other problems that will cause concern for evangelical readers. Hart makes some very questionable claims about Gnostic influences on John’s Gospel (p. 137).  He expresses doubts about the traditional doctrine of hell (pp. 154-55). He mistranslates John 1:1 and makes demonstrably false claims about the New Testament usage of the Greek word for ‘God’ (p. 204). Most worrying of all, however, is that a biblical understanding of the gospel is almost entirely absent from the book. I confess I knew nothing about David Bentley Hart before reading his book, but by the end of the book all the evidence pointed to his being Eastern Orthodox: too low a view of the Bible and too high a view of the Church Fathers; an understanding of salvation as ‘divinization’; all emphasis on the Incarnation and none on the Atonement; the gospel as metaphysical and moral transformation, with justification by faith nowhere to be seen. (A few minutes’ research on the internet confirmed my suspicions.)

For all these reasons, I cannot recommend this book as a tool for evangelism or even for pre-evangelism. That’s a shame, because much of the book is both informative and a delight to read. But taken as a whole, it does not make a case for Christianity that any informed evangelical could endorse.

This site uses Akismet to reduce spam. Learn how your comment data is processed.