How Biblical is Molinism? (Part 2)

In this short series I’m considering the question: How well is Molinism supported by the Bible? In the first post I summarized how I plan to approach the question, before looking at two biblical teachings which Molinism seeks to accommodate: (1) comprehensive divine providence and (2) God’s knowledge of counterfactuals of creaturely freedom. I concluded that while the Bible does indeed affirm (1) and (2), and Molinism is consistent with the Bible on those points, Augustinianism also affirms those points. So Molinism holds no advantage over Augustinianism with respect to (1) and (2). I then added:

In the next few posts I want to examine three potential candidates for proposition p from the Molinist side: (1) that incompatibilism is true; (2) that God desires all to be saved; and (3) that God is not the author of sin.

Incompatibilism About Free Will

As I noted in the first post, Molinists are committed to a libertarian view of free will. Libertarianism involves two basic claims:

Freedom: we make (at least some) genuinely free choices, i.e., choices for which we can be held morally responsible.

These two claims together entail that determinism is false, but since compatibilists typically agree that we make genuinely free choices, it’s the first claim which really distinguishes libertarians from compatibilists.

So the relevant question here is whether the Bible offers any support for incompatibilism. Before answering that question, however, I want to make two preliminary points. The first is this: I’ve argued before that there are different kinds of determinism and there are non-trivial senses in which Molinism is deterministic. What the Molinist really objects to is causal determinism, the thesis that every event is entailed by prior sufficient causes. So when we consider the incompatibilist claim in what follows, we should understand it as the claim that freedom is incompatible with causal determinism.

Secondly, while there’s no debate about whether Molinists are committed to libertarianism, there’s some debate about whether Augustinians are committed to compatibilism. (Recall that I’ve framed this discussion in terms of whether Molinism or Augustinianism has better biblical support.) Oliver Crisp, for example, has defended “libertarian Calvinism” as a live option for Calvinists. To the contrary I’ve argued in several places (e.g., here and here) that confessional Calvinists should reject libertarianism.

As far as I’m aware, there’s nothing in the Bible which comes close to explicitly affirming or straightforwardly implying incompatibilism about free will, i.e., that genuine freedom is incompatible with causal determinism. Indeed, it’s hard to imagine what that would look like. Certainly we wouldn’t expect the Bible to make an explicit affirmation that freedom (or moral responsibility) is incompatible with determinism (or some relevant kind). And it would be question begging to argue, “The Bible teaches that we make some free choices; determinism is incompatible with free choice; therefore, the Bible implies that we have libertarian free will.” Such an argument merely assumes incompatibilism as one of its premises. The question is whether the Bible offers any independent support for that premise.

When Molinists (along with other Christians who hold to libertarianism) are invited to defend their view of free will, they rarely appeal directly to biblical texts, for the very reason that there are no biblical texts which serve that purpose. Usually they’ll appeal to commonsense intuitions about free will or to one or more philosophical arguments for incompatibilism. So their defense comes to this: the Bible affirms that we can make free choices (i.e., choices for which we are held morally responsible); free choices must be libertarian free choices (appealing to intuitions and/or philosophical arguments); therefore the Bible supports libertarianism (indirectly at least).

This line of defense can be criticized on several fronts. In the first place, the notion that libertarianism is the commonsense view of free will is highly questionable. A number of studies have been done on the question and there’s nothing like a consensus. Depending on which questions are asked (and how exactly those questions are framed) it appears that some people’s intuitions lean towards incompatibilism and others lean towards compatibilism. Indeed, it seems many people have conflicting intuitions when it comes to free will and moral responsibility. 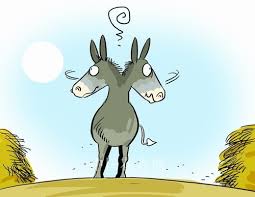 In any case, all this is largely beside the point. Recall that the question we’re considering here is whether any biblical teachings support Molinism over against Augustinianism. Appeals to extra-biblical intuitions or philosophical arguments obviously don’t count as biblical teachings!

There is one verse, however, to which many libertarians have pointed in support of non-deterministic free will:

No temptation has overtaken you that is not common to man. God is faithful, and he will not let you be tempted beyond your ability, but with the temptation he will also provide the way of escape, that you may be able to endure it. (1 Corinthians 10:13)

The suggestion is that the apostle Paul is affirming (or at least assuming) some version of the Principle of Alternative Possibilities (PAP):

PAP: A person is morally responsible for an action only if that person could have done otherwise (i.e., was able to do otherwise).

There are, however, several problems with this appeal to 1 Corinthians 10:13.

1. There is debate even among libertarians over whether PAP is true (and, indeed, which version of PAP is true, for there are variations on the basic version above). Some advocates of libertarianism argue that the sine qua non of libertarian free will isn’t PAP but rather some other condition, such as the “ultimate source” condition (i.e., a person chooses freely only if he is the “ultimate source” of his choice).3 So even if 1 Corinthians 10:13 supported PAP, it wouldn’t immediately follow that it supports libertarianism.

2. Not only are there libertarians who reject PAP, there are also some contemporary compatibilists who endorse PAP — or at least, endorse a compatibilist-friendly version of PAP.4 There are ways to understand the phrases “could have done otherwise” and “had the ability to do otherwise” which are consistent with causal determinism. So even if 1 Corinthians 10:13 supported PAP, it wouldn’t immediately follow that it supports only an incompatibilist version of PAP. Clearly what Paul says in that text isn’t fine-grained enough to distinguish between compatibilist and libertarian understandings of the crucial term ‘ability’.

3. Note two things about Paul’s statements in 10:13. First, they’re directed specifically to believers, not to all human beings (see 10:1). Secondly, they indicate that God will actively provide something to believers, something they wouldn’t otherwise have in the normal course of events. So if this assurance from Paul really does imply a libertarian view of free will, it further implies that libertarian freedom is something God will actively (supernaturally?) bestow upon Christians when faced with temptations. But that’s simply not enough for the Molinist. For according to Molinism, all human beings have libertarian freedom in the normal course of events (since libertarian freedom is taken to be a necessary condition for moral responsibility). If anything, the libertarian reading of 1 Cor. 10:13 runs contrary to the basic suppositions of Molinism.

So here’s the bottom line. 1 Corinthians 10:13 offers no clear support for an incompatibilist view of free will. There are perfectly straightforward ways to understand this Pauline assurance that are consistent with compatibilism.5 In reality, the only way to get libertarian free will out of this biblical text is to supplement it with various philosophical arguments (that PAP is the distinctive tenet of libertarianism, that compatibilist versions of PAP are inadequate, etc.) and even then it doesn’t get you to the kind of ordinary-libertarianism-for-all posited by Molinism.

I’m aware of no other biblical texts or teachings that offer any straightforward support for incompatibilism about free will. I therefore conclude that there is no such support. In the next post in this series, I’ll consider whether the biblical teaching that God desires all to be saved favors Molinism over Augustinianism.

Addendum: For some incisive critiques of the Molinist/Arminian appeal to 1 Cor. 10:13 see the following posts by Steve Hays:

This entry was posted in Philosophy, Theology and tagged Augustinianism, compatibilism, free will, incompatibilism, libertarian free will, Molinism, principle of alternate possibilities. Bookmark the permalink.

3 Responses to How Biblical is Molinism? (Part 2)