Posted on 22 September 2017 | Comments Off on Warfield Lectures: Anthropology & Transgenderism

Last October I had the great privilege of delivering the Fifth Annual B. B. Warfield Lectures at the invitation of Erskine Seminary and First Presbyterian Church, Columbia, SC. Edited versions of those two lectures have now been published in RTS’s online journal, Reformed Faith & Practice:

The first lecture is to some degree setup for the second, but each one is self-standing.

Why Campus Ministry Is So Challenging

Christian evangelistic ministry on college and university campuses is incredibly important, but also extremely challenging. Why is that? Is it because college students are typically smarter and better educated than the average person, so that campus ministers have be equipped to deal with serious intellectual objections to the Christian faith?

Generally, no. It’s challenging mainly because too many college students have had their God-given minds so warped by relativism and postmodern anti-realism (the view that ‘reality’ is defined by how we choose to think and speak about the world) that they will cheerfully deny what’s plainly obvious for the sake of political correctness.

Further evidence of the problem appeared in my Twitter feed this morning:

I’d love to think this is a spoof, but it isn’t. (Sadly, despite what the students in the video suggest, I can’t make something true merely by wishing or thinking that it’s true!) Behold the rotten fruit of the sexual revolution and its repudiation of a biblical worldview. 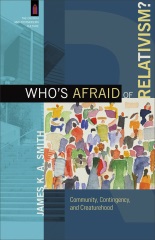 END_OF_DOCUMENT_TOKEN_TO_BE_REPLACED

Postmodernism is modernism driven to its logical end: the end of logic.

Consultations have been launched, first in Scotland and now in England and Wales, to consider whether the definition of marriage should be changed to include same-sex partnerships. Some opponents have argued, on various grounds, that marriage shouldn’t be redefined. Commendable as this response may seem to most Christians, it concedes far too much, for it misleadingly implies that marriage is the sort of thing that could in principle be redefined. (If you don’t see this point, just reflect on the difference between “You shouldn’t drive faster than the speed limit” and “You shouldn’t drive faster than the speed of light”.)

To grant that marriage could be redefined is to capitulate to a postmodernist anti-realism according to which all social structures and institutions are mere human conventions and there is really no such thing as human nature, understood in traditional metaphysical terms. We must insist that marriage is not something that can be defined and redefined as we see fit. Marriage is a divine institution, not a human social construction like chess or money that we invented for our own purposes. There wasn’t a point in time at which humans ‘defined’ marriage in the way that, say, a foot was once defined as 12 inches. Marriage was bestowed upon us, not created by us.

If the traditional view of marriage is correct then the idea that we could redefine marriage to include same-sex partnerships is on a par with the idea that we could redefine elephants to include hippopotamuses. Only the most deluded postmodernist would say that elephants were defined by humans. (Don’t make the mistake here of confusing elephants with the English word ‘elephant’. Words don’t have trunks and tusks.) But of course, we humans didn’t define humans any more than we defined elephants. To think otherwise would be to put the cart before… well, the cart. And if marriage is grounded in the very nature of human beings, as the traditional view maintains, then we humans didn’t define marriage any more than we defined ourselves. Nor are we in any position whatsoever to redefine marriage. It simply can’t be done — and Christians, along with other traditionalists, should be quick to point out the presumption and absurdity of claims to the contrary.

The very fact that these consultations have been launched in the first place, never mind their final outcomes, reveals just how deeply Western culture has sunk into the mire of postmodernism.