Pragmatism is the view that a belief or claim is ‘true’ not because it accurately represents the way things are, but because it has beneficial effects. Truth is what’s useful, what works, what gets results. Correspondingly, religious pragmatism is the view that religious beliefs should be deemed ‘true’ if and only if they have good effects. Obviously this is quite a departure from the commonsense view of religious beliefs and religious truth, according to which the statement “God exists” is true if and only if, as a matter of fact, God exists.

Bertrand Russell was no friend of orthodox religion, but his critique of William James’s religious pragmatism is both devastating (in my judgment) and a delight to read: 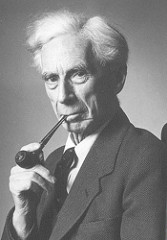 In a chapter on pragmatism and religion he reaps the harvest. “We cannot reject any hypothesis if consequences useful to life flow from it.” “If the hypothesis of God works satisfactorily in the widest sense of the word, it is true.” “We may well believe, on the proofs that religious experience affords, that higher powers exist and are at work to save the world on ideal lines similar to our own.”

I find great intellectual difficulties in this doctrine. It assumes that a belief is “true” when its effects are good. If this definition is to be useful—and if not it is condemned by the pragmatist’s test—we must know (a) what is good, (b) what are the effects of this or that belief, and we must know these things before we can know that anything is “true,” since it is only after we have decided that the effects of a belief are good that we have a right to call it “true.” The result is an incredible complication. Suppose you want to know whether Columbus crossed the Atlantic in 1492. You must not, as other people do, look it up in a book. You must first inquire what are the effects of this belief, and how they differ from the effects of believing that he sailed in 1491 or 1493. This is difficult enough, but it is still more difficult to weigh the effects from an ethical point of view. You may say that obviously 1492 has the best effects, since it gives you higher grades in examinations. But your competitors, who would surpass you if you said 1491 or 1493, may consider your success instead of theirs ethically regrettable. Apart from examinations, I cannot think of any practical effects of the belief except in the case of a historian.

There is another difficulty. Suppose I say there was such a person as Columbus, every one will agree that what I say is true. But why is it true? Because of a certain man of flesh and blood who lived 450 years ago—in short, because of the causes of my belief, not because of its effects. With James’s definition, it might happen that “A exists” is true although in fact A does not exist. I have always found that the hypothesis of Santa Claus “works satisfactorily in the widest sense of the word”; therefore “Santa Claus exists” is true, although Santa Claus does not exist. James says (I repeat): “If the hypothesis of God works satisfactorily in the widest sense of the word, it is true.” This simply omits as unimportant the question whether God really is in His heaven; if He is a useful hypothesis, that is enough. God the Architect of the Cosmos is forgotten; all that is remembered is belief in God, and its effects upon the creatures inhabiting our petty planet. No wonder the Pope condemned the pragmatic defence of religion.

We come here to a fundamental difference between James’s religious outlook and that of religious people in the past. James is interested in religion as a human phenomenon, but shows little interest in the objects which religion contemplates. He wants people to be happy, and if belief in God makes them happy let them believe in Him. This, so far, is only benevolence, not philosophy; it becomes philosophy when it is said that if the belief makes them happy it is “true.” To the man who desires an object of worship this is unsatisfactory. He is not concerned to say, “If I believed in God I should be happy”; he is concerned to say, “I believe in God and therefore I am happy.” And when he believes in God, he believes in Him as he believes in the existence of Roosevelt or Churchill or Hitler; God, for him, is an actual Being, not merely a human idea which has good effects. It is this genuine belief that has the good effects, not James’s emasculate substitute. It is obvious that if I say “Hitler exists” I do not mean “the effects of believing that Hitler exists are good.” And to the genuine believer the same is true of God.

James’s doctrine is an attempt to build a superstructure of belief upon a foundation of scepticism, and like all such attempts it is dependent on fallacies. In his case the fallacies spring from an attempt to ignore all extra-human facts. Berkeleian idealism combined with scepticism causes him to substitute belief in God for God, and to pretend that this will do just as well. But this is only a form of the subjectivistic madness which is characteristic of most modern philosophy.

Alvin Plantinga on Russell’s teapot, from a 2014 interview by Gary Gutting:

G.G.: You say atheism requires evidence to support it. Many atheists deny this, saying that all they need to do is point out the lack of any good evidence for theism. You compare atheism to the denial that there are an even number of stars, which obviously would need evidence. But atheists say (using an example from Bertrand Russell) that you should rather compare atheism to the denial that there’s a teapot in orbit around the sun. Why prefer your comparison to Russell’s?

I disagree: Clearly we have a great deal of evidence against teapotism. For example, as far as we know, the only way a teapot could have gotten into orbit around the sun would be if some country with sufficiently developed space-shot capabilities had shot this pot into orbit. No country with such capabilities is sufficiently frivolous to waste its resources by trying to send a teapot into orbit. Furthermore, if some country had done so, it would have been all over the news; we would certainly have heard about it. But we haven’t. And so on. There is plenty of evidence against teapotism. So if, à la Russell, theism is like teapotism, the atheist, to be justified, would (like the a-teapotist) have to have powerful evidence against theism.

Plantinga goes on to discuss whether there is such evidence, whether there are any good arguments for or against atheism, and whether theistic beliefs need to be justified by philosophical arguments. He concludes with a nice summary of his Evolutionary Argument Against Naturalism.