Edgar on Van Til

You might know that P&R have been publishing new editions of Cornelius Van Til’s major works. You might also know that those new editions have introductions and explanatory notes by WTS professors William Edgar and K. Scott Oliphint.

You might not know, however, that a couple of Edgar’s introductory essays are fully contained in the free samples of those books available on the Westminster Bookstore website:

Comments Off on Edgar on Van Til

Posted on 27 September 2016 | Comments Off on Does Christianity Really Work?

The novelty of the New Atheism lies not in the originality or rigor of its arguments against God and religion, but in the moral indignation of its advocates. Religious beliefs in general, and Christian doctrines in particular, are criticized not merely as false and irrational but as immoral and harmful. Richard Dawkins once characterized Roman Catholicism as “a disease of the mind which has a particular epidemiology similar to that of a virus.” Sam Harris has on numerous occasions expressed his concern that “fundamentalist Christianity” is hindering scientific and moral progress (which, in his mind, are much the same thing). The late Christopher Hitchens famously opined, with characteristic hyperbole, that “religion poisons everything.” 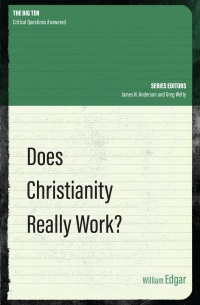 William Edgar begs to differ. In his latest book Does Christianity Really Work? (the first volume in the new Christian Focus apologetics series The Big Ten) Edgar argues that the teachings and practices of biblical Christianity have been an undeniable force for good in the world, despite the serious failings of those who have professed to be followers of Christ. Furthermore, the Christian faith offers the moral and spiritual resources to overcome every trial and temptation that the world can throw at us. Edgar highlights the significant role Christianity has played in peace-making efforts around the world, in social reform through the centuries, and in the development and provision of health care. He also reflects with pastoral wisdom on more ‘existential’ issues: the quandary of unanswered prayer, the problem of those who “fall away” from the faith, and the challenges presented by “besetting sins” such as pornography use and drug addiction.

Christianity may tell a great story and make big promises, but can it actually deliver the goods in practice? Does it really work? While honest about the failures of the Christian church and the realities of life in a broken world, Edgar’s book nevertheless offers a persuasive answer in the affirmative.

Dr. Edgar offers to all a Christianity of logic, truth and transcendence—an ultimate balm that will both heal and protect against the harsh realities of life. He does not hesitate to confront the difficult questions that challenge our faith in times of doubt while also giving his readers a vision of a society transformed by Christian leadership. — Al Sikes, Former Chairman, FCC, and author of Culture Leads Leaders Follow

From now on, when skeptics ask, ‘Where in the world has Christianity done any good,’ we have a powerful and convincing reply in my friend, William Edgar’s newest book. Bill debunks myths and blows the dust off of little known historical facts about the impact of the Gospel in a hurting world, giving the reader a solid grasp on the positive influence of Christian principles during the darkest of times. Best of all, Does Christianity Really Work? is a guide to us as we promote
peace, joy, and justice in our broken world. For our times and all times, I highly recommend this remarkable book. — Joni Eareckson Tada, Joni and Friends International Disability Center

William Edgar addresses one of the main questions that sceptics and seekers have about Christianity—does it actually work? Looking at some issues from a positive perspective (the good that Christianity has done, and continues to do) and others from a negative (the alleged harm it is supposed to have brought), Edgar gives reasoned, evidenced and clear answers. This is a good primer for the seeker or the sceptic. — David Robertson, Pastor, St Peter’s Free Church of Scotland, Dundee, and Trustee of SOLAS, Centre for Public Christianity

Comments Off on Does Christianity Really Work?