An electronic component supplier is being sued over allegedly homophobic terminology in its product catalog. Daniel Everett, a resident of Burlington, Massachusetts, is seeking nearly $100,000 in damages from Portland-based Posnex Components for emotional distress he claims was caused by images and descriptions in the company’s Spring 2014 catalog.

Everett, an interior designer who recently married his long-term partner Kevin, first became aware of the offensive material while visiting a relative who is a DIY electronics enthusiast. “I sat down at his kitchen table and there was a Posnex catalog lying open at the section for audio and video connectors,” he explained. “As I glanced down the page, the terminology of ‘male’ and ‘female’ caught my attention. But as I looked more closely at the photos and the product descriptions, I became appalled at what I saw.” 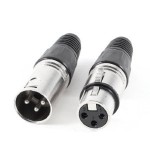 Everett described how he felt “shaken and sick to the stomach” as he began to examine the other pages in that section of the catalog. “I’m no expert when it comes to electronics, but I know prejudice and bigotry when I see it. It was crystal clear from the images and descriptions that the ‘male’ and ‘female’ components had been deliberately designed only to connect with each other. The obvious insinuation was that other forms of coupling are dysfunctional. I felt utterly humiliated and degraded. The Posnex catalog is nothing less than homophobic propaganda. It’s subliminal hate speech.”

In a brief statement, a spokesperson for Posnex Components insisted that the company is “absolutely and unequivocally committed to diversity, inclusiveness, equality, and LGBTQIA rights” and “deeply regrets any offense or distress that may have been inadvertently caused by the use of more traditional electronics terminology in our catalog.”

“We have launched an internal investigation into the issue,” the spokesperson added, promising that a fuller statement would be released “just as soon as we figure out which senior executive needs to take the fall for this.”

Lindsey (formerly Lindsay) Fredericks, president and founder of Citizens Against Sexclusivism and Heteropression, expressed doubts about the sincerity of the initial response from Posnex and charged the company with being “on the wrong side of history and on the wrong side of connectivity.”

“The Posnex case is merely the tip of the iceberg,” warned Fredericks. “Our research indicates that this sort of discriminatory heteronormative language is a standard feature of electronic component catalogs. Evidently this is an endemic problem. The sad fact is that the electronics industry is way behind the times when it comes to representing the full panoply of human sexual identity. Manufacturers need to move toward a diversity-celebrating inventory of components that reflect all kinds of connectivity and none. Are there components that can accept either ‘male’ or ‘female’ connectors — or both at the same time? Are there ‘male’ connectors that change into ‘female’ connectors and vice versa? Are there components that accept any number of connectors of any type? If not, why not? What about connectors that defy any categorization at all? Why is no one making unique components that connect only to themselves?”

“These are the kinds of questions that leaders in the electronics industry need to be asking,” Fredericks concluded. “But the problem doesn’t stop there. We all need to consider how our use of modern appliances and technologies reflects our values and attitudes toward gender identity. People who use predominantly heteronormative connectors in their homes and offices ought to reflect on how committed they really are to sexual equality and human rights.”