Posted on 11 October 2017 | Comments Off on Christians Not Welcome?

An Oxford College has banned the Christian Union from its freshers’ fair on the grounds that it would be “alienating” for students of other religions, and constitute a “micro-aggression”.

The organiser of Balliol’s fair argued Christianity’s historic use as “an excuse for homophobia and certain forms of neo-colonialism” meant that students might feel “unwelcome” in their new college if the Christian Union had a stall.

Freddy Potts, vice-president of Balliol’s Junior Common Room (JCR) committee, said that if a representative from the Christian Union (CU) attended the fair, it could cause “potential harm” to freshers.

Mr Potts, writing on behalf of the JCR’s welfare committee, told the CU representative at Balliol, that their “sole concern is that the presence of the CU alone may alienate incoming students”.

“Historically, Christianity’s influence on many marginalised communities has been damaging in its methods of conversion and rules of practice, and is still used in many places as an excuse for homophobia and certain forms of neo-colonialism.”

He said that barring the Christian Union from the fair “may be a way of helping to avoid making any students feel initially unwelcome within Balliol”.

This is appalling and hypocritical on multiple levels; I’ll highlight only one. Note that the Christian Union is being excluded not because of anything specific to that organization, but because of supposed problems with Christianity. The very presence of representatives of the Christian faith at the freshers’ fair is deemed hazardous because it might ‘alienate’ new students and make them feel ‘unwelcome’.

Does it not occur to the JCR committee that some of these incoming students will be Christians, and that the exclusion of the Christian Union for the reasons they give might alienate those Christian students and make them “feel initially unwelcome”?

Comments Off on Christians Not Welcome?

Will the Real Haters Please Stand Up?

Opponents of same-sex marriage (a.k.a. defenders of real marriage) are routinely characterized as hateful. But who are the real haters? What does the empirical evidence tell us?

On May 8, residents of North Carolina will have the opportunity to vote on whether the following amendment (“Amendment One”) should be added to the state’s constitution:

Marriage between one man and one woman is the only domestic legal union that shall be valid or recognized in this State.

Not surprisingly, numerous yard signs are on display around Charlotte, where I live: some for the amendment, some against. One house on a busy road between my home and my office has three “Against” signs in its yard, right next to the road. They’ve been there for over a month now and no one has removed them, defaced them, or otherwise interfered with them. Free speech has been honored. 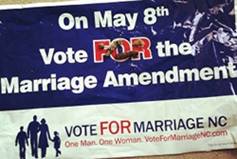 Meanwhile, a friend of mine put a “For” sign outside his house in a quiet middle-class neighborhood. Within days it had been vandalized with obscenities. A few weeks ago the seminary where I teach placed a single “For” sign on its grounds. Since then our receptionist has received what she described as a series of “ugly” telephone calls. Apparently these aren’t isolated incidents — far from it. They’re just two instances of a pattern of intolerance, intimidation, and flagrant disregard for free speech.

So who are the real haters here? Perhaps Freud’s projection theory has something to it after all.

Addendum: Another despicable example from yesterday’s local news. (This is also close to home: Pastor Kulp is a friend and a graduate of RTS.)

“I have always hated anybody who is not tolerant of gay men or lesbians or bisexuals.” (Daniel Radcliffe, a.k.a. “Harry Potter”)

Apparently tolerance is a one-way street for Mr. Radcliffe.