Rebutting Objections to the Pro-Life Position

An article I contributed to the August 2019 issue of Tabletalk magazine.

Comments Off on Rebutting Objections to the Pro-Life Position

When Is a Baby a Baby?

The post-Christian West is woefully confused and conflicted about the status of unborn human beings. Consider a striking illustration provided by two recent articles from the BBC News website (surely no friend of the pro-life cause).

The first article is entitled “What’s going on in the fight over US abortion rights?” and seeks to explain to non-Americans “what’s behind the push … for anti-abortion bills across the US.” (Note the terminology used in the article: “abortion rights,” “anti-abortion bills,” “reproductive health,” etc.) If you read through the article, you’ll find that the human being within the womb is consistently referred to as a ‘foetus’ (the British spelling of ‘fetus’). Nowhere in the article is the word ‘baby’ used. 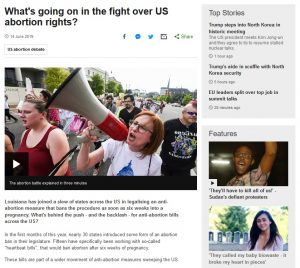 But the word ‘baby’ does appear elsewhere on the webpage — just once, in a link to another article in the ‘Features’ sidebar. This second article uses a paraphrased quote as its title: “They called my baby biowaste – it broke my heart in pieces.” It tells the heart-wrenching story of a woman who suffered nine miscarriages over a five-year period and how she and her husband created nine “spirit houses” in a landscaped garden to commemorate their lost children.

Read the whole thing, but here are some notable quotes from the article (bold added for emphasis):

Five of the babies were lost in the first trimester of pregnancy and four in the second.

What do you do with the remains of a child lost during pregnancy? How do you honour their memory?

[Debbie] visits her nine houses regularly. “I go on their birthdays – their due dates – and the days that they passed. I go there for Mother’s Day, Father’s Day, Easter, Valentine’s Day. My husband and I need to connect with the children we would have otherwise celebrated with,” says Debbie.

One word conspicuous by its absence, however, is ‘foetus’.