An Observation About the Tuggy-Brown Debate 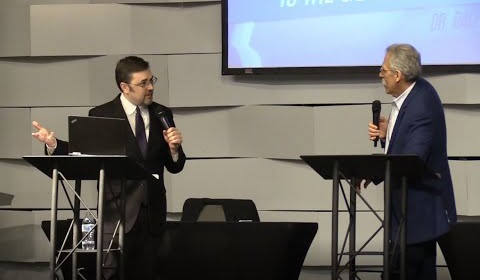 I thought it was a very useful, high-quality debate between two smart, serious people who stuck to the arguments and treated each other with respect. Tuggy and Brown are quite different in their skill sets, theological methodologies, and speaking styles, which made for an interesting match-up.

I have only one observation to make here, which I haven’t seen noted elsewhere. Throughout the debate, from his opening to his closing statement, Tuggy pressed the claims that the NT doesn’t reflect a trinitarian theology (as he defines it) and that Brown hadn’t offered an intelligible “Trinity theory” (or any Trinity theory at all, for that matter). But note the question that framed the debate:

Is the God of the Bible the Father alone?

Strange as it may sound, given the specific proposition being debated, Brown could have adopted a modalist position and still won the argument! (Interestingly, Tuggy suggested a few times that Brown was in fact expressing a form of modalism, albeit unwittingly. Even if Tuggy were right about that, it would have been beside the point in the context of the debate.) Brown’s task wasn’t to defend the specific claim that there is one God who exists in three distinct persons, still less to defend some metaphysical model for that claim. Indeed, he expressed reservations about adopting creedal language (“persons”) rather than biblical language. I don’t share those reservations, but again, that’s beside the point here.

All Brown had to do was argue that the Bible teaches the full deity of Christ, i.e., that the Son is divine in the same sense that the Father is divine. In my judgment Brown did argue that persuasively, and Tuggy’s alternative interpretations of the key texts seemed stretched (e.g., Heb. 1:10-12 and Col. 1:15-17 are really speaking about the new creation; the logos in John’s prologue is something like God’s eternal wisdom rather than the preexistent Son who became flesh). For that reason, even while admitting my own biases, I’d say Brown won this round.

Comments Off on An Observation About the Tuggy-Brown Debate